I would be so honored if you could Rate and Review Elaine’s Kitchen Table on iTunes!

You can watch the full episode of Easy Daysies on Dragons’ Den at www.easydaysies.com:

In this 3-part series, we recount our journey with Easy Daysies to the Dragons’ Den (the Canadian version of Shark Tank). This episode is about what happens after the taping of the show – signing the deal, the airing of the show, and all the craziness that surrounds it!  Hopefully this will provide motivation and inspiration to anyone who is thinking about applying for a business reality TV show.

Be sure to also check out episodes 11 and 12 – about our experiences before and during the Den!

Links to all 3 Easy Daysies appearances on Dragons’ Den

www.EasyDaysies.com – this is my company!  “Daysies” is spelled with a “y” because we are all about helping kids have easier days.

If you know any kids (and especially moms of kids) aged 3+ who could benefit from easier days brought about by Easy Daysies Magnetic Schedules for Kids, shop now and use this promo code at checkout:

Elaine:                                  00:04                     Hi, welcome to Elaine’s Kitchen Table! I’m so honored to have you here with us today where we talk about the business of real life. Elaine’s Kitchen Table is a podcast show to inspire, equip and empower women and moms through lessons learned off the kitchen table about business and parenting and life so that we can be that person we want our children to grow up to be. Now these lessons come from experiences our own and those of our awesome interviewees about lessons they have learned and have been passed on from those they admire so that we all can realize that we aren’t going through any of this on our own, but we can grab a nugget or a eureka moment that we can take and be inspired in our own life and in business. So today is part three of our journey to the Den. And when I say the Den, I mean Dragons’ Den, which is the Canadian version of Shark Tank. And with us today is Ron Comeau, my business partner and husband.

Elaine:                                  01:17                     He is a man of many words. Oh dear. Okay. Well we have had quite the journey and it’s not over. We’re still on our journey with our Dragon partners now after the Den. That means that last moment when we were in that studio, that TV studio in Toronto filming Dragons’ Den on the ninth floor of the CBC building, that was an amazing, amazing experience. As we taped at 6:30 in the morning and left with inciting a bidding war between all five Dragons. I’m doing a quick recap here. And we did choose two of those amazing Dragons to be our partners. And who were they Ronald?

Elaine:                                  04:52                     And they told us if we do air, they would let us know about a week ahead of time so that you can prepare and get the family together. And get all your friends together to watch. And that was quite frightful because you know, you taped the show and they, they told us you have anywhere between five to 45 minutes in front of the Dragons and we actually were in front of the five investors for about 48 minutes. And we all know that’s not what they show on television. No one gets the 48 minutes of the show, but it can be anywhere from seconds that they show on the show to, well we got just under 10 minutes, which was a huge, awesome, awesome, awesome opportunity to have exposure for 10 minutes on television with a commercial break in between. And you can absolutely find our episode on CBC Dragons’ Den, Easy Daysies or find our website at www.easydaysies.com and you’ll see our episode there or you can just check out the show notes at www.elaineskitchentable.com/013

Elaine:                                  07:17                     That’s right. We taped in April for the season that started in the end of September of that year. And then you would just wait to see if it happens. So from April to September, those, it was a crazy anticipation of not knowing. And, and the season goes until March. So you could be one of the last episodes to air if you get to air. And we actually did get a call about two months before our airing, because we’re out in Vancouver and the producers called saying that the Dragons were coming out to Vancouver for an event and they wanted to invite me as part of the event because it was going to be a Q & A session. And I was going to be on the panel with Bruce Croxon and Jim Treliving, at SFU, a university business school. And I was honored and I said, absolutely. And she said, well, actually she goes, I shouldn’t be telling you this because we don’t normally tell people when they’re going to air, but you’re actually airing then, I’m like what!? And we were so excited. It was crazy. And so then, we were told to plan an airing party and to get a press release out that we were going to be airing and it was quite, quite crazy, do you want to add to this Ron?

Elaine:                                  09:58                     Yes. And, and before this evening, our producers told us to monitor our website traffic. And so we had all that set up. We actually called our host provider and gave them a warning that something might happen so that our, we just wanted to give them a heads up so that our website would not crash because we, we want to make sure everything would run smoothly. And it was quite busy because we had a lot of media interviews from radio to local papers and that was awesome and a huge blessing. And we started monitoring that website. And what were you going to say Ron, about time zones?

Ron:                                       10:41                     Well we were, we were busy, you know, being nervous about the show, going on the air and getting ready. But we knew that it would air in the Atlantic time zone first, which was four hours ahead of us where we are in the Pacific time zone. So that’s at 4:00 PM our time is 8:00 PM their time. And anyway, we started to see the uh, all the visitors pile in and then the next time zone over is the Eastern time zone, which is where the biggest population of Canada is. That’s Ontario and Quebec. And at that point, all of a sudden, boom, we were getting, we counted 12 visitors per second on average were hitting the site while the segment was on, which I don’t know if people were, I mean this was 2011 a lot of people had smart phones by then, but they’re, if they’re running to their computer or they got a laptop with them, it’s like not after the segment, but during the segment. Huge amounts of traffic.

Elaine:                                  11:29                     And what I loved is we saw orders pouring in as it hit each province. And that was really exciting to see. And I, I just was, it was crazy. And our phone kept ringing because we had friends from the eastern province has calling us, congratulating us and Facebook was going crazy as well. And it was a really overwhelming blessing and we were excited and we tried not to look at media too much because our party was going to be three or four hours after it started airing. And so that was exciting. And I remember sitting in the car at Boston Pizza and doing a radio interview before I could step into the restaurant. So definitely the exposure that being on Dragons’ Den provides is priceless.

Ron:                                       14:54                     And maybe we should explain due diligence because I know a lot of people think you shake hands on the show, you sign a piece of paper and it’s done. But really, as we mentioned before, neither of us, neither the people going on the show or the investors know each other, know anything uh, well we know a bit about them. They don’t know anything about us. They don’t know any of our numbers. They don’t know if what we say is true. So due diligence means checking to see if what you said is true and also checking your books, checking your numbers. So basically when you make a handshake, it’s based on a whole bunch of assumptions on what you’ve said. And due diligence is making sure that that’s all true. And we’ve heard that a lot of times, you know, that people will inflate their numbers in order to get attention and uh, or make, make promises or exaggerations just in order to get the deal. And then of course it’s going to fall through later when that comes to light. So anyway, we went through a period of due diligence and we actually heard that once we did get a deal, which we did sign the deal with both of the investors that we shook hands with on the show that we were the first one, first deal to close for that season. And even though that was only, what was it, four months later, it seemed like an eternity.

Elaine:                                  17:39                     And then after that, last season, we got a phone call from the producers and they said that Ford, the car company is one of Dragons’ Den show sponsors. Ford had chosen nine companies they thought exemplified their four pillars of success and they chose Easy Daysies as one of those companies. And we were so excited. I did not win a car, but that’s okay. We were offered two 30 second segments of commercial time during primetime television and they told us that was worth more than a car and we were so excited. And so we got to be on Dragons’ Den for a third time and that was fantastic. And you can also find that on those websites that we stated earlier. So Dragons’ Den is an awesome, awesome opportunity to have that exposure, but even more important, it’s an awesome opportunity to learn about business, whether you’re watching it or preparing to pitch yourself to anyone. Watching that show gives you so many ideas of what to do right and want to do wrong. And actually auditioning for the show is probably the best business 101 crash course ever because you’re going to have to get those numbers and those ducks in a row. You’re going to have to know what your valuation is. You want to have a business plan and you want to be able to say what your business is in 60 seconds and nail it.

Elaine:                                  22:01                     Yeah, I think you actually work harder after the show actually, and it doesn’t stop people do come up and say, oh, did Jim and Kevin get you in, in that bookstore or in Staples? And I actually say no, I did the research and found out who the buyers were. And then I persevered and was persistent. I actually guessed at some emails and, a lot of prayer of faith went into it too though and got those appointments and flew myself out and had those meetings and got Easy Daysies into those stores. But I will say that the credibility of having Jim and Kevin as partners is a huge asset. 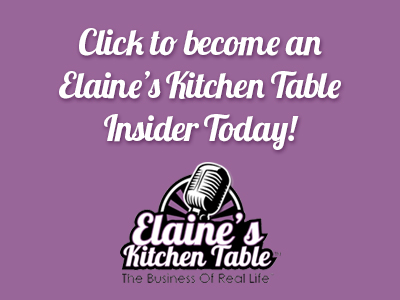